Punjab plans to incentivise switch from paddy to maize cultivation 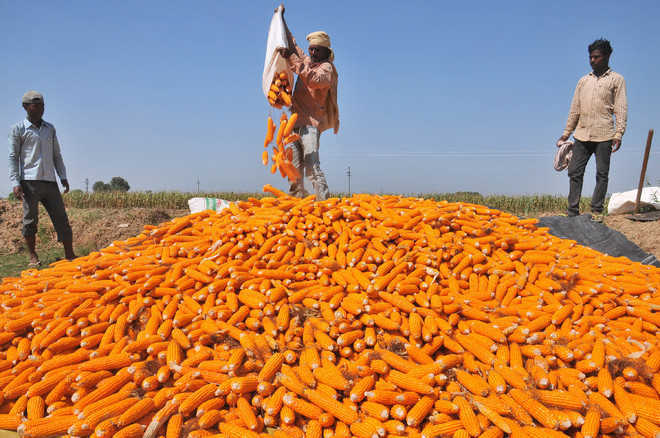 Punjab’s Agriculture Department has launched a campaign to bring 2 lakh hectares of land under maize cultivation—up from the current 1.08 hectares. This it hopes will lead to production of 7,60,000 metric tonnes of maize (corn)—3,46,000 metric tonnes more than last year,

Unlike paddy, maize is not a water guzzler—a fact that is particularly significant for a state like Punjab, where groundwater tables are categorised as “over-exploited”.  Paddy requires an average of 3,700 litres of water for 1 kg of rice. In contrast, winter maize requires about 1,222 litres of water for the same quantity of crop.

The Punjab Agriculture Department has also launched a programme to compensate some farmers in paddy dependent districts who will switch over from paddy to maize. The department believes that this transformation would also help arrest the problem of burning paddy stubble.

“Monetary compensation of Rs 23,500 per hectare will be given to such farmers, with a cap of 4,000 hectares selected from 200 clusters in 20 blocks of the state. The cash incentive is to put across a message to farmers that was time to contribute to environment protection and preservation by switching over to alternative crops like maize,” said Sutantra Kumar Aery, Punjab's Director of Agriculture, told The Tribune.

The department is also offering a subsidy of Rs 90 per kg on maize seeds.

The unchecked burning of paddy stubble in Punjab and the resultant air pollution has been a matter of great concern for the central and state governments as well as environmental activists. The Union Ministry Environment and Forests had asked Punjab Government to take concrete measures to deal with the problem.

Another incentive that the department hopes will help farmers make the switch is the subsidy it plans to offer on drip irrigation system for maize in select fields in Punjab.

What makes maize an attractive option for farmers in Punjab is the remuneration. The crop, sources in the department said, sells at Rs 2,000 per quintal—more than the Centre’s current Minimum Support Price of Rs 1,760 for it.

“Winter maize growers are happy for the crop arriving in the market and adhering to specifications of up to 14 per cent moisture) was selling over Rs 2,000 per quintal. Private buyers purchase most of the crop produced,” Narinder Mohan, a Hoshiarpur-based commission agent, said.