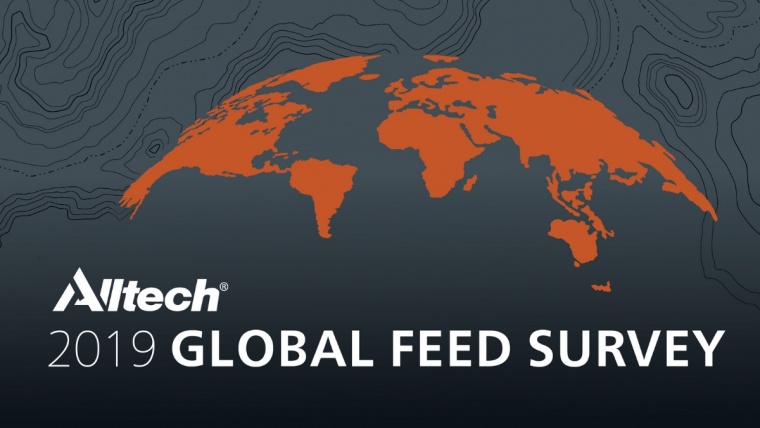 [LEXINGTON, Ky.] – The 2019 Alltech Global Feed Survey, released today, estimates that international feed tonnage has increased by a strong 3 percent to 1.103 billion metric tons of feed produced in 2018, exceeding 1 billion metric tons for the third consecutive year. The eighth edition of the annual survey includes data from 144 countries and nearly 30,000 feed mills. The feed industry has seen 14.6 percent growth over the past five years, equating to an average of 2.76 percent per annum. As the population grows, so does the middle class, which is well reflected in an increase in overall protein consumption.

The top eight countries are China, the U.S., Brazil, Russia, India, Mexico, Spain and Turkey. Together, they produce 55 percent of the world’s feed production and contain 59 percent of the world’s feed mills, and they can be viewed as an indicator of the trends in agriculture. Predominant growth came from the layer, broiler and dairy feed sectors.

“Alltech works together with feed mills, industry and government entities around the world to compile data and insights to provide an assessment of feed production each year,” said Dr. Mark Lyons, president and CEO of Alltech. “We are proud to present the eighth annual Alltech Global Feed Survey and share the results publicly to demonstrate the importance of the animal feed industry as we strive to provide for a planet of plenty.”

The Alltech Global Feed Survey assesses compound feed production and prices through information collected by Alltech’s global sales team and in partnership with local feed associations in the last quarter of 2018. It is an estimate and is intended to serve as an information resource for policymakers, decision-makers and industry stakeholders.

Globally, broiler production increased by approximately 3 percent in 2018. There was growth in all regions, except for Latin America, in which a very small decline was observed. Africa showed 9 percent growth, demonstrating an overall trend that as populations grow and become wealthier, interest in protein — particularly in palatable chicken — does as well.

To access more data and insights from the 2019 Alltech Global Feed Survey, including the results booklet, an interactive global map and a pre-recorded video presentation of the results by Dr. Mark Lyons, visit alltechfeedsurvey.com.